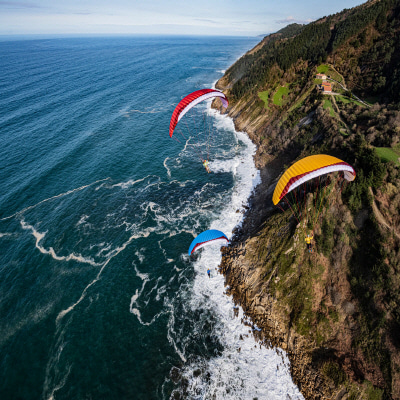 구매하기예약주문
구매하기예약주문
Bolero 7
THE SUGAR AND THE SPICE
The Bolero 7 marks a step-change in the Bolero series, incorporating our latest technological developments. The result: a wing that — compared to its predecessor — is more forgiving, yet more fun to fly.
The Bolero 7 is perfect for the formative years of a flying career, from first steps to first thermals and well beyond. For casual or more experienced safety oriented pilots, it could even be all the wing they will ever need.
- new planform and arc gives greater agility in the turn whilst increasing roll stability
- 3rd generation Equalized Pressure Technology (EPT) inlet system further stabilises internal wing pressure, --- giving increased pitch stability and aerodynamic efficiency
- smooth inflation without shooting
- early take-off at low speed
- "thermal sniffing" character
- new line layout makes lines easier to inspect and less prone to tangles
A supremely balanced delight
Safety is paramount in a beginner wing, and the Bolero 7 is probably our most stable wing ever in terms of pitch and roll. Yet the wing is also great fun to fly, tight flat turns are possible and it’s easy and intuitive to vary the bank. There is zero tendency to enter a spiral dive in case the pilot inadvertently pulls too much brake.
Early take-off at low speed
As soon as the wing is overhead, the efficient profile is already producing lift. The wing is airborne at a low speed, and provides gentle forward momentum on light wind take-offs. In stronger winds, the wing remains equally well behaved with no hanging back.
Ideal brake travel
The highly progressive brake travel means that the wing is easy to control in the turn and this encourages the pilot to learn to use subtle brake inputs. At the same time, the brake pressure increases quickly as more brake is pulled. The full brake range is very long, and thus the wing is extremely forgiving for students and beginner pilots.
Thermal sniffing
The Bolero 7 will greatly help a pilot learning to thermal. The wing has a tendency to automatically fly towards lift. On entering the lift, there is a helpful biting which minimises the pitch corrections a pilot needs to make, enabling them to fully concentrate on maximising the lift (or enjoying the view!).
Custom fabric
The Bolero 7 uses our custom Myungjin fabric on the upper surface, which was developed specifically for greater durability and porosity resistance. This fabric has been well proven with our Fuse 3 tandem wing, which has been flown thousands of hours worldwide. Other fabrics are used strategically throughout the wing.
디자이너 노트
Designer Gin Seok Song explains the development process of the Bolero 7:
The target with the Bolero 7 was to improve the handling, but during the development we were also able to improve the stability in both pitch and roll.
The new planform has more curve towards the wing tips and a straighter trailing edge — this gives an efficient turn. Even with tight turns the bank stays quite flat. We also worked on optimising the arc, which prevents a pilot accidentally entering a spiral dive whilst thermalling. The brake travel is highly progressive, only a small amount of brake is needed to turn the wing, but pressure increases quickly and it’s almost impossible to enter a stall unintentionally. Around the stall point, the wing recovers easily upon easing up on the brakes.
We also made some improvements to our EPT (Equalised pressure technology) system. On take-off, the wing immediately stabilises above the pilot and the lift-off comes very early at low speed. In addition, the wing self-corrects into small directional gusts on take-off and sniffs out thermals in the air.
Overall, the whole team was really happy with the Bolero 7 and we had a lot of fun test flying it. We didn’t feel so limited, even though it’s a wing for beginners!
자재 사항
Canopy cloth
Upper surface leading edge: Dominico Dokdo 30D (WR) / Myungjin MJ40 MF
Upper surface: Myungjin MJ32 MF0
Lower surface: Porcher Skytex Easyfly 40
Lines
Upper: GIN TGL 80 (Aramid)
Middle: GIN TGL 125 (Aramid), Liros DSL 70, Liros PPSL 120
Main: LIROS PPSL 120 / 160 / 200